Richmond is a town in South West London, located on a meander of the River Thames within the London Borough of Richmond upon Thames. Richmond is a much sought-after residential location, and among the most affluent areas in the country. Often noted for its high quality of life, it has been found to be one of the happiest places to live in the UK.

Richmond was founded following Henry VII's building of Richmond Palace in the 16th century, and the area has had royal connections ever since. In 1777, Richmond Bridge was built over the Thames to connect Richmond and Twickenham. 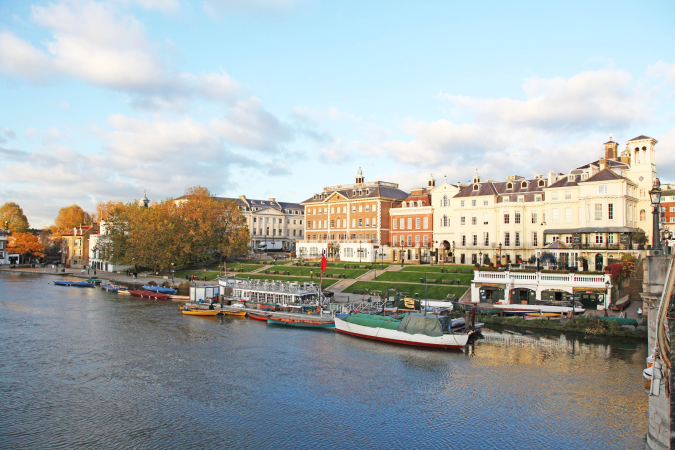 Richmond has a well-established shopping area with over 200 shops spread across George Street, The Quadrant, and Hill Street. Well-known high street shops like Marks & Spencer and House of Fraser sit alongside designer boutiques such as Matches and Feather & Stitch, a high-end ladies fashion store selling one-off pieces from around Europe.There are also jewellers, interior stores, specialist food shops and a whole host of independants. The exquisite Petersham Nurseries contains a restaurant, plant centre along with homewares and gifts just a stroll along the Thames from the town centre. A great farmers’ market is held every Saturday in Richmond.

The Thames is at the heart of Richmond and has an extensive frontage around Richmond Bridge, containing many bars and restaurants. The river path provides access to residences, pubs and terraces, as well as various greens, lanes and footpaths. The Bingham is an exquisite boutique restaurant and hotel on the riverbank with views over the Thames and The Petersham Hotel also contains a wonderful restaurant with sweeping views over the river and Petersham Meadows. The White Cross is a traditional, dog-friendly pub on the river bank serving up real cask ales and a good selection of wines. They also have a selection of wellies kept at the water’s edge for those who fancy a pint during high tide!

Richmond has some magnificent houses and exquisite period conversions, from the elegant Georgian terraces on Richmond Hill and Richmond Green, to Queen Anne, Victorian and Edwardian townhouses. The Alberts Cottages are highly sought-after, as are the grand mansion blocks along the riverbank and the imposing property on Richmond Hill. Recently, new luxury developments have been built along the banks of the Thames to provide contemporary living for young professionals. Apartments within Richmond Riverside are highly popular and often command hefty price tags.

Green spaces in and around Richmond

Richmond has an abundance of green spaces to enjoy, including the Richmond Hill conservation area and Richmond Park. Richmond Park is the largest of the capital's eight Royal Parks and the biggest enclosed space in London. The park is a National Nature Reserve, London's largest Site of Special Scientific Interest, and a European Special Area of Conservation. It is home to the beautiful Isabella Plantation, Pembroke Lodge, and herds of red and fallow deer. A specific Act of Parliament protects the scenic view of the River Thames from Richmond.

The River Thames at Richmond

There are plenty of year-round activities and attractions to be enjoyed along this stretch of the River Thames. Some highlights include:

As the largest independent specialist selling and letting riverside properties in the Richmond TW10 area, very few people know the Thames like us.  From tide times to local river events and the best waterside restaurants and pubs, riverhomes estate agents have the river knowledge.

Get the low down on watersides developments

If you are thinking of moving, talk to us. Get in touch with the waterside property experts at your local branch or request your free, no-obligation valuation.